Of all the gases used in semiconductor manufacturing, Diborane (formula B2H6), is the most challenging for cylinder gas regulator reliability.   Diborane is normally supplied as a mixture with a balance of N2, He or H2.   Pure Diborane and its mixtures are not stable at room temperature.  At room temperature, Diborane decomposes slowly and at elevated temperatures it decomposes rapidly. 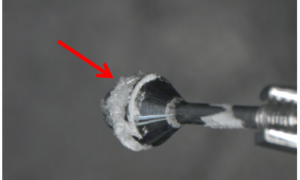 This poses a problem for pressure regulators.  When Diborane decomposes it creates heavier boron hydrides and hydrogen.  The heavier boron hydrides are volatile liquids and solids such as Decaborane  (formula B10H14). At room temperature and cylinder pressures, Decaborane can sublimate into vapor.   When Decaborane flows into the regulator, due to pressure and temperature drop, it can deposit on the poppet and seat causing a seat leak.

In addition to natural decomposition of Diborane, it is extremely reactive to oxygen and moisture.   The reaction of Diborane with oxygen will create Boron Trioxide (formula B2O3) and water. Diborane will react with moisture to create Boric acid (formula H3BO3) and Hydrogen. Boron Trioxide is a white amorphous solid that can also deposit on the regulator’s poppet and seat.

What can be done to maximize gas regulator performance and reliability?

From a gas management point of view, minimizing decomposition can be done by maintaining low storage temperatures throughout the supply chain of gas delivery, on-site storage, and cylinder cabinet use.   It has also been reported to us that mixtures with H2 rather than N2 improve stability of Diborane.

Another best practice is to change the cylinder at a minimum pressure such as 200 psi to ensure any possible B2H6 byproducts in the cylinder are not introduced into the gas system.

When specifying a dual stage regulator, it is important to monitor the outlet pressure of the first stage to monitor signs of a seat leak.   The MP option is a monitoring port available with the 1700 or 2700 models.  A continuous rise above set point during static flow periods indicates a seat leak.  Other design options include filtration before the regulator and purge glass bleed through the gas manifold’s cylinder connection. This bleed of purge gas through the cylinder connection minimizes air and moisture into the gas system during cylinder changes.  AP Tech offers the “CB” or constant bleed option for many of its valves for this purpose.

It is also important to remember that the byproducts of B2H6 are toxic.  Generally, there are restrictions on shipping toxic materials if a failure analysis is required.   Based on our many years of experience with Diborane gas regulation, a seat leak is almost always caused by particles such as Decaborane and Boron Trioxide making the effort and risk of shipping a Diborane regulator suspected of seat leak for failure analysis unnecessary.

Want to learn more about our Diborane gas handling solutions?  Talk to one our experts, contact AP Tech here.

A note to our valued APTech visitors

This website uses cookies to improve your experience while you navigate through the website. Out of these, the cookies that are categorized as necessary are stored on your browser as they are essential for the working of basic functionalities of the website. We also use third-party cookies that help us analyze and understand how you use this website. These cookies will be stored in your browser only with your consent. You also have the option to opt-out of these cookies. But opting out of some of these cookies may affect your browsing experience.
Necessary Always Enabled
Necessary cookies are absolutely essential for the website to function properly. These cookies ensure basic functionalities and security features of the website, anonymously.
Functional
Functional cookies help to perform certain functionalities like sharing the content of the website on social media platforms, collect feedbacks, and other third-party features.
Performance
Performance cookies are used to understand and analyze the key performance indexes of the website which helps in delivering a better user experience for the visitors.
Analytics
Analytical cookies are used to understand how visitors interact with the website. These cookies help provide information on metrics the number of visitors, bounce rate, traffic source, etc.
Advertisement
Advertisement cookies are used to provide visitors with relevant ads and marketing campaigns. These cookies track visitors across websites and collect information to provide customized ads.
Others
Other uncategorized cookies are those that are being analyzed and have not been classified into a category as yet.
SAVE & ACCEPT